I wish I was a better writer so my writing could match the magnificent state capitol buildings.  Nowadays, we build billion-dollar football stadiums and basketball arenas. When these states were being founded, money was spent on building a structure worthy of holding the state’s most important activity – government. It makes we wonder if we have progressed or regressed as a society.

I had planned to post to this blog after visiting each building, but it was hard to do while traveling.  To keep this short and readable, I’ll touch on a few highlights. Let me start with what I found to be the most amazing.

The Art in the Capitol
Each of these buildings is an art museum. They are using art to tell the story of their state. Without a doubt, the room in Missouri where Thomas Hart Benton told the history of Missouri was the most impressive.  This whole trip was worth it just to see this painting which covers three sides of the room. The painting was completed in 1936 and I was amazed by the number of African-Americans he included in the painting.  Here are a couple of pictures.  Read lots more about the mural here:  http://benton.truman.edu/index.html 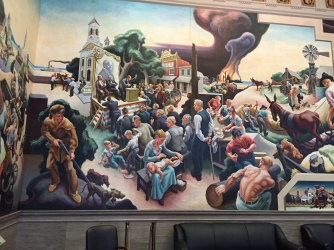 In Kansas, I was struck by the mural painted by John Steuart Curry about the radical abolitionist John Brown. It shows Brown with a rifle in one hand, the bible in the other hand, and a tornado and a fire in the background. https://www.kshs.org/p/kansas-state-capitol-online-tour-tragic-prelude/16595. Turns out that Kansas’s John Steuart Curry, Missouri’s Thomas Hart Benton, and Iowa’s Grant Wood were the leaders in an art movement in the 1920’s called Regionalism; a fact I learned on this trip. Kansas also had the most recent artwork – a nice historical mural finished in 2013. (Minnesota could learn something from Kansas about adding new artwork to the capitol building.) 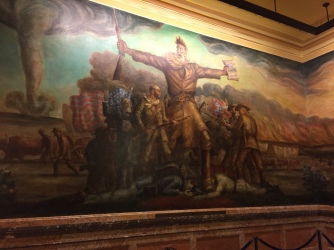 Iowa is very proud of their mural called “Westward” (even though the people in the painting are facing North) and the six glass tile mosaics right above it. They also had a painting of ears of corn which the tour guide did not discuss.  She should have. Nothing says Iowa like corn ears. 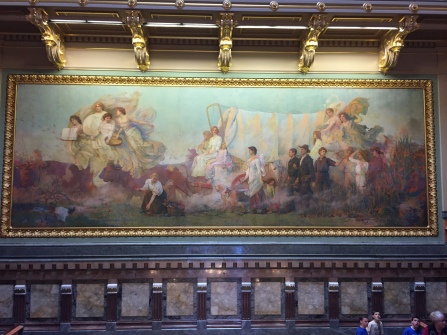 Tours
I found the tour guides interesting and helpful, so I would encourage you to take the tours rather than a self-guided tour.  The best tour without a doubt was the tour to the top of the dome in Kansas.  It included 296 steps on steep, narrow, and spiral stairs.  At the top, you get to go outside to take pictures.

State Capitol Liberty Bell Replicas
In 1950, 55 replicas of the Liberty Bell were cast and shipped to all the states, territories, and the District of Columbia. Thank you to my tour guide in North Dakota (my first stop) for telling me about this so I could look for them on my trip. There is no official website that discusses these bells, but there is a personal website about trying to see all 55 replicas. http://tomlovesthelibertybell.com/  Tom mentions on his website that the Kansas bell is in storage and cannot be viewed which is what I found when I was there.

Honoring Important State Residents
Most state capitol buildings had areas that honored important citizens and politicians of the state. Some had pictures v and some had busts. I should have taken more pictures of these areas. 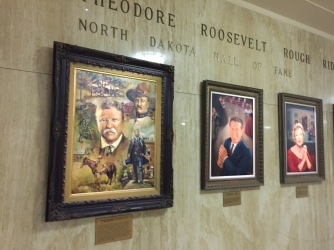 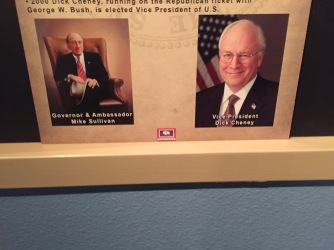 Kansas had framed pictures of all the presidents, but has not yet added Donald Trump. How did the country of Washington, Jefferson, Lincoln, and Roosevelt ever elect Trump as president?

Capitol Building Grounds
I encourage you to walk around the ground of each capitol building where you will learn more about the history of the state from the statues and memorials. In Colorado, you can see the step which declares that you are now one mile above sea level.

Iowa had the nicest and largest grounds which included a wonderful statue dedicated to the Civil War solders. I especially liked it because it included a topless woman with large nipples. I can’t believe that the straight-laced citizens of Iowa have not passed a law to cover her up. 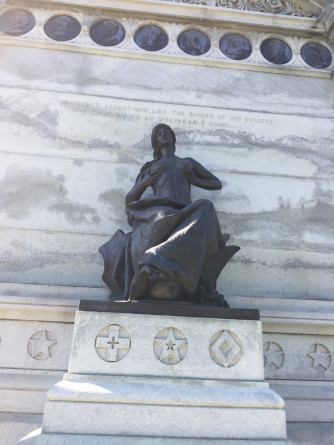 I’ll conclude this post with that edifying comment about the topless statue. I could say a lot more but I’m sure most of you have barely made it this far.  Hope you enjoyed it.

Below are the pictures of all the state capitol buildings which I visited.

Clockwise Starting with the large picture: IA, MO, ND, KS, CO, WY
As you can see, Wyoming’s Building was closed for tours due to a massive remodeling.