On Monday I visited the newly renovated State Capitol Building and the new State Office Building. I had a great time. To understand why, let me share a little personal history.

I grew up on a farm in Iowa. For as long as I can remember, I’ve had an interest in politics and, thanks to my Dad, have been a strong Democrat. Dad was a Roosevelt-Truman Democrat and said often that only the democrats helped him during the depression. For me, I attended a small outstanding liberal arts college in Iowa because I received educational assistance thanks to programs designed by Iowa Democrats.

At College, I met a lovely girl from Edina, got married and moved to Minnesota in 1977.

I was thrilled to be moving to the land of Humphrey, McCarthy and Mondale. I was sure that I would get involved in politics and work at the state capitol someday. It did not happen. I started working in business, had a couple of kids and never saw the opportunity to change career directions.

Now I’m retired and have the opportunity to pursue my political interests.  Visiting the capitol was another step on starting this journey.  I’ve probably been to the capitol 10-12 times over the years but never when the legislature was in session.  I do like touring state capitols sinced there is so much history to learn about each state from seeing the state capitol building. I’ve visited 7-8 state capitols in my life.

I’m extremely fortunate to be represented by two outstanding individuals at the capitol, Representative Melissa Hortman and Senator John Hoffman, and I naturally stopped by to see them on Monday.

Melissa got me a pass so I could sit on the floor of the House of Representatives to watch a very short session where they passed on uncontroversial bill. I took a guided tour of the capitol building and then walked over to see John in the new Senate building. As you can see from the picture, I got to see John in action as he enthusiastically greeted the daughter of one of his constituents who was delivering girl scout cookies. The girl was delighted by all the attention.

It was an enjoyable visit and one that I will be repeating in the future. I encourage everyone to visit the renovated capitol to see one of Minnesota’s most magnificent architectural treasures.

Please share this so we can get ready for President Klobuchar 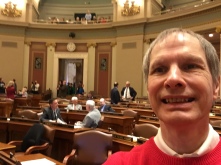 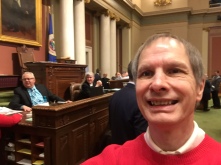