Saturday was quite a day at the 2018 DFL State Convention!

As a first time attendee to the state convention, and a strong supporter of Tim Walz for Governor, I was looking forward to the day. The Saturday agenda was the endorsement for Attorney General and the endorsement for Governor (such a simple agenda!). I thought it would be a routine vote to endorse Lori Swanson for Attorney General and then I hoped that we would quickly endorse Tim Walz for Governor and Peggy Flanagan for Lt. Governor. It didn’t work out that way, to state the obvious.

Before I get started, let me set the stage. There were about 1,400 delegates in the arena at Mayo Civic Center in Rochester. The delegates were grouped by congressional district and then by senate district. My congressional district is CD3, and I was 1 of 17 delegates from Senate District 36. Our delegation sat at a long table. We had half of the table, and the other half was for CD3 officials, CD3 state representatives, and CD3 state senators. As the day moved along, it became helpful to be close to those veteran convention attendees.

Two final stage-setters. The voting was done electronically. Each delegate was assigned a uniquely labeled keypad. From what I heard, this greatly sped up the process from past conventions. To win the endorsement, a candidate needed 60% of the delegates to vote for that person.

Let’s start with the biggest shocker of the day – the endorsement of Matt Pelikan for Attorney General. I knew nothing about Matt before the day started. Just before the endorsement process started, a woman stopped by our table for two minutes to spread negative information about Lori Swanson. She said that Lori was probably going to get the nomination, but that we might want to vote for Matt as a protest vote. The Pelikan backers seemed to be organized, because throughout the hall I could see other people spreading negative Lori Swanson propaganda.

Matt’s name was placed in nomination by Nancy Nord Bence, Executive Director of Protect Minnesota – a prominent gun control organization. She gave a strong speech endorsing Matt, and then Matt got up and gave a fiery speech including some accusations against Lori Swanson.

When it came time for Lori’s name to be placed in nomination, she sent about ten people on stage to talk about how Lori had helped them. They didn’t build enthusiasm for Lori as they spoke. Then something puzzling happened. There was a convention rule that limited the time for nomination videos/speeches/celebrations to 15 minutes. This rule was enforced only one time at the convention. It was for Lori. Half of Lori’s speakers on stage didn’t get a chance to talk before they were cut off by the convention chair. Lori did not speak to the convention.

Then we voted. The results were: Swanson 52.2%, Pelikan 47.2%, No Preference 0.6%. I was shocked. I turned to the veterans at the end of the table and saw that they were also shocked. Then, right before the second ballot was about to start, Lori pulled out, and Pelikan became the endorsed candidate.

As near as I can tell, the decisive issue was gun control. Nancy Nord Bence was very effective for Matt. This page gives the background on Matt and the gun issue: http://mattpelikan.com/issue-1-gun-safety/

So that started the day.

In my delegation, we had five for Walz, five for Murphy, three for Otto and four undecided.

After the nomination videos, speeches, and celebrations for the three candidates were completed, they had a 20 minute Q&A.  Delegates could submit written questions for the Q&A to a box next to the stage. The questions were reviewed to see if they were appropriate, and then the approved questions were put back in the box to be randomly drawn, except for the first question.

The first question was mandated by the convention rules. It was “If a candidate other than yourself gets endorsed, will you under any circumstances run in the primary against the DFL endorsed candidate? Yes or No answer only.”  Murphy “No,” Walz “Yes,” Otto “No.” That was a big moment in the process. Many DFL’ers in the convention hall are supporters of the endorsement process and frown on candidates that run in the primary.

Then we voted. First ballot results: Walz 41.5%, Murphy 39.6%, Otto 18.5%. I didn’t like these results. Otto had decidedly underperformed. Based on conversations I had with other delegates, my feeling was that second choice for most Otto delegates was Murphy. If Walz had come close to 50%, then the Otto delegates would have more easily moved to Walz to support a winner.

Second ballot: Murphy 47.1, Walz 45.3, Otto 7.5. Not good for Walz. Otto addressed the convention before the third ballot and said that these were not the results she was expecting, and she would take the weekend to “think about it.”  I, along with veterans at the end of the table, thought that was a strange statement.

Before the fourth ballot, word came down from the top of the Walz team that we should all vote for “No Endorsement.” I didn’t understand the request.  Then a strange thing happened. Walz and Otto walked into the hall holding hands to show solidarity. I didn’t understand their strategy at the time, but apparently, they wanted the Walz and Otto supporters to join forces to get to 60% “No Endorsement” which meant Otto could continue to campaign while not breaking her promise to not run against an endorsed candidate. Unfortunately, it was too late.

The next ballot, Murphy was at 51.9 (going over the magic 50), No Endorsement 39.8, Walz 8.3.  The next ballot held steady at 52.5 for Murphy and 46.7 for No Endorsement. At this point, Ken Martin, Chairman of the DFL, stepped in to make a forceful argument about the importance of the endorsement process. It had the desired effect. The last ballot had Murphy at 58.7.

Right before the voting was going to start for another ballot, I received a text message from the Walz campaign to join them outside for a thank you rally in ten minutes. I texted back asking if the rally was going to happen after the end of the next ballot. Right after I hit send, the chair of the convention announced that Tim Walz had withdrawn and we should move to accept Erin Murphy as the endorsed candidate.

As the Murphy delegates were going nuts, the yellow-shirted Walz delegates walked out of the hallway to the rally.

At the rally, Tim and Peggy announced that they would be running in the primary and asked all of us to remain enthusiastic about the upcoming campaign. It’s clear that every Walz supporter is committed to supporting Tim and Peggy until the primary on August 14.

I wish I had the answers to those questions. I guess we all need to stay tuned.

With Peggy Flanagan on Friday Night
We were so hopeful 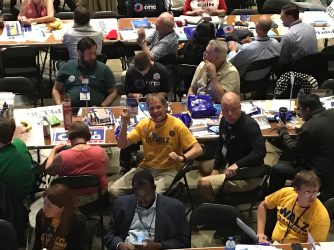 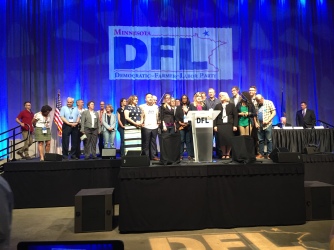 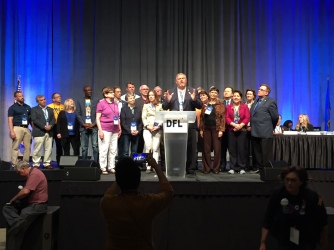 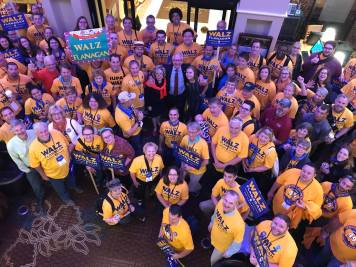 Does it surprise any of you that I just
“happened” to be standing next to Tim and his wife?